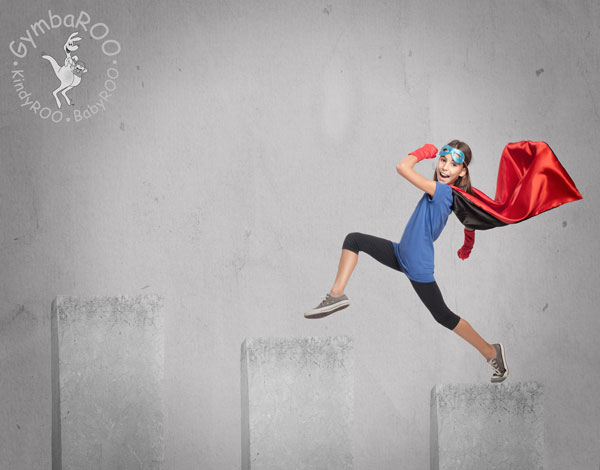 A new study involving 400 Australian Primary school students has added irrefutable proof to the argument that motor skill based movement programs are crucial for brain development and learning ability and should play a key role in our education system. In this study the average neurological age of the children participating in the movement program increased by an average of nearly TWO YEARS in the 10-12 month testing period. Conversely, the non-participating group improved their average neurological age by ONLY SIX MONTHS over the same time period. The movement classes were run in place of literacy or numeracy sessions. Designed by GymbaROO-KindyROO, The Unlocking Potential (UP) movement program is a sensory-motor-perceptual program for primary schools. It proposes to unlock the potential for all children.

This is not the first time the UP program has been implemented with outstanding results. In 2008, UP was trialed, specifically studying the effects of the movement program on literacy and speech in primary school aged children.1 Teachers reported that the program resulted in improved in literacy, concentration and the ability to follow instructions. The Government of the time chose to ignore these findings. Link to ‘No child should fail’ study.

This year another smaller study involving Primary school children and the UP program clearly showed improved academic achievement, NAPLAN results, behaviour, physical, social and emotional skills and overall happiness at school.2 Teachers also reported an increase in self-esteem, confidence and social interaction, physical control in the playground as well as a willingness to attempt new tasks and to take on the responsibility for their own learning. Link here.

One does need to ask, is ignoring these results and holding off the implementation of sensorimotor movement programs in Primary schools doing our children, their futures and the future of our country a gross disservice?

The UP program – not just a fitness program

According to recent research, physical activity programs for children should, initially, focus more on developing motor skills rather than physical fitness, allowing the maturation and integration of all areas of the neurological system that prepare the child for the challenges of school learning as well as physical capacity and ability.  Once these are in place, fitness can then become the focus.3

The UP program is designed to train teachers in assisting students to ensure baseline motor skills, that provide the foundation for more complex physical skills are in place and to help students to reach their optimum level of both mental and physical function.

Importantly, most of the students involved with UP found the program motivating and enjoyable, which encouraged performance of the developmental exercises and activities.

The weight behind why our children need movement programs Regular physical activity has long been associated with improving physical health, cardiovascular fitness, reducing weight and, more recently, with enhancing brain health.4  Conversely, sedentary lifestyles are on the increase across all age groups. In Australia only 19% of 5 -14 year old children get the recommended 60 minutes of active exercise each day.5

Reduced physical activity is further exacerbated during school hours as the educational sector strives to improve numeracy and literacy results by increasing the focus on academic classroom-based strategies and reducing opportunities for active play at school.6

This is despite research that increasingly reveals the link between motor development and cognitive skills7. Regular sensorimotor movement exercises in school aged children has been shown to improve executive function,8 working memory,9 cognitive control,10 attention,11 behaviour in the classroom and playground,12  and academic performance.13

314 students from four Australian Primary Schools participated in UP sessions for 25 minutes at the beginning of the school day, three days a week during each school term over the year period 2014 – 2015. Additionally, 86 children had teachers that chose not to participate for a number of reasons, including the ‘already crowded curriculum’ or a lack of interest in the program. UP classes were run at a time that had been historically been allocated to literacy or numeracy sessions.

Outcomes were measured pre and post implementation, by Naglieri’s Draw a Person assessment. This is a validated and reliable instrument for determining improvements in a child’s neurological age and stage. This tool simply and efficiently determines a child’s awareness of their own body through self-drawing, an essential element that underscores both physical and mental health. Research has shown that DAP drawings in the young child are directly correlated to IQ at 14 years of age.14

You can see the enormous gains to Patrick’s neurological age – over 3 years in a 10 month period. What it all means

School Readiness: Is my child ready for school? A checklist

Why GymbaROO kids excel socially and in leadership roles.