GymbaROO Babies: Where are they now? 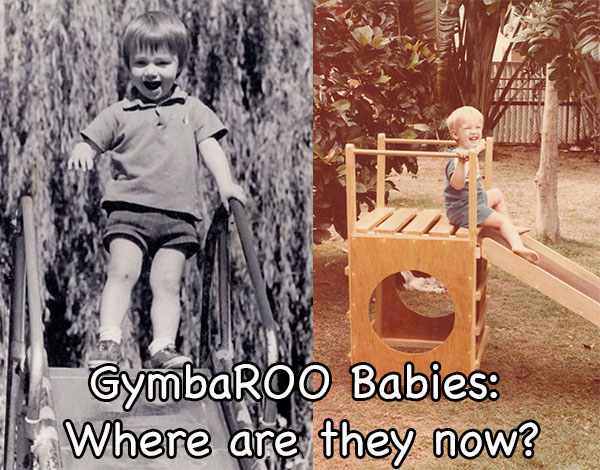 GymbaROO and KindyROO kids are excelling academically, socially, emotionally and on the sporting field. These children spent the first three or more years of their lives involved with GymbaROO. Their parents also reinforced our program at home by integrating the information and activities they had learned during classes into their daily lives. We cannot emphasise enough how much of a difference this can make to your child’s future.

Enjoy these stories, featuring two of the very original GymbaROO kids, both of whom were ‘GymbaROOed’ before GymbaROO centres even existed! Read what an impact this had on their lives.

Ross was born over ten years before the first GymbaROO was started, however this does not mean he wasn’t a GymbaROO kid. He was, in fact, one of the truly original GymbaROO kids. Ross was born to Dr Mary Lou Sheil, sister of GymbaROO’s founder Margaret Sasse. Marg and Mary Lou were very close, and when Marg began researching the importance of neuro-development in the early years to future learning, relatively unheard of in the 70’s, she tugged her sister on the sleeve and said… “You need to look at this.” So down that road they travelled together and Marg became GymbaROO and Mary Lou became a doctor who specialised in learning difficulties, food allergies and related behavioural and learning issues. While Marg was called  ‘a danger to children’ and her methods likened to ‘witchcraft’ by ‘educational experts’ at the time, Mary Lou, who lived in Hunters Hill, became regarded by many in her profession as  ‘that Quack on the Hill.’ Both of these extraordinary women were well, well ahead of their time and today there is an undeniable and vast amount of research and empirical evidence that supports the work they were doing. The number of children’s lives they changed for the better between them is innumerable. Ross’s is one of them.

In his early years, Ross could easily have been labeled with ADD (Attention Deficit Disorder), a growing trend in the 1970s. He was a handful – hyperactive, impulsive, explosive and inattentive. Mary Lou and Marg, constantly learning and growing into what they would become, refused to believe that this was ‘just the way he was’ and that Ritalin, an over-prescribed drug for ‘problem children’, was the answer. They set about doing what would now be termed ‘GymbaROOing’ him. Mary Lou played games with Ross that involved rolling, crawling, swinging, spinning, upside-down, patterning and rhythm… you know, all those movements you do at GymbaROO. She put a GymbaROO overhead ladder over his bed so that he could brachiate, (swing across the ladder), at any given opportunity. Climbing ladders, hammocks and a trapeze were put in the garden. What Ross loved best was being spun round and round as he hung onto the Hills Hoist…back in the days when you could! She also, amongst other things, took preservatives and additives out of his diet. Ross could have easily been one of the countless kids who fell through the large cracks in the education system of the time, many of which still exist today. Instead, he excelled at high school. He was socially very popular, exceptional in sport and academically successful. He thrived during his high school and university years and is now a doctor who specialises in Accident and Emergency. He loves life, plays music and is still involved in many sports. He especially loves his wife and their three GymbaROO kids, and is forever grateful to his mum and aunt. GymbaROO is a family business in every sense of the word. In the early years, when GymbaROO was just starting, Marg Sasse, the founder, had a habit of practicing and refining her ideas on every family member who walked (or crawled) through her door. Almost every grandchild, niece and nephew were enticed to test the new designs of equipment, exercises or activities that Marg had developed.

Hugh, Marg’s grandson, was one of the lucky ones. He had a very difficult birth that caused oxygen deprivation to the brain, and this resulted in developmental delays. Marg took every opportunity to ‘GymbaROO’ him.  As a result, Townsville benefitted by being the first country town in Australia to have a GymbaROO, opening in 1984, just two years after the first centre was launched in Melbourne. The family backyard also had an array of GymbaROO equipment including an overhead ladder, slides and swings, as well as a giant trampoline dug into the ground, a flying fox and a swimming pool. Hugh was well and truly ‘GymbaROOed’ as were his younger brother and sister. In fact, the whole neighbourhood benefited – I mean, where else would you want to be if not at the house with the flying fox off the upstairs verandah and over the swimming pool?

While school was not easy, Hugh benefitted enormously from all the GymbaROO activities and exercises that were a daily part of his life and he successfully achieved his Year 12 certificate and studied Information Technology at TAFE. Today Hugh is a successful IT technician with three delightful boys – a young GymbaROO family of his own! Why every young child needs a trapeze and how to make one.