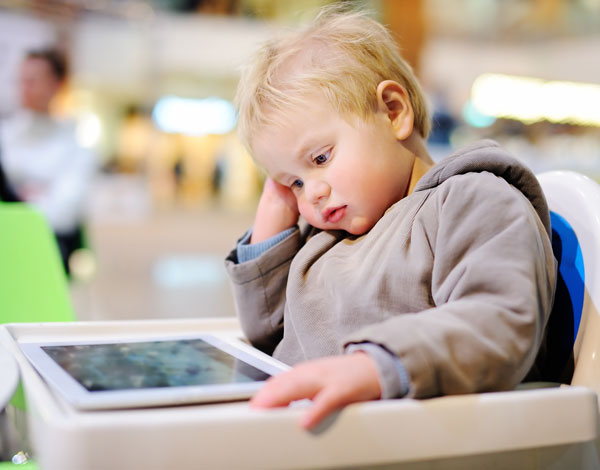 A study conducted by AV Sosa, PhD of Northern Arizona University involving parents with ten to sixteen-month-olds found that electronic toys may slow language development in toddlers. These expensive toys may be advertised as ‘educational’ for developing minds, however the study found just the opposite.

Each parent and child was given three sets of toys. The first set included electronic toys such as a baby laptop, a talking farm and a baby cell phone.  The second set contained traditional toys such as wooden puzzles, shape sorters, rubber blocks with pictures and board books.  All sounds were recorded to monitor the play activities.  The results showed that while children were playing with electronic toys, the parents spoke less. There were also fewer verbal exchanges between parent and baby and the parents responded less often to their child. The babies were also less vocal and produced less words while playing with noisy electronic toys, than when playing with traditional toys. It was found that books produced the most verbal exchanges between parents and their children, however the study also demonstrated that play with traditional toys may result in verbal interactions that are as rich as those that occur during reading a book.

Dr Jenny Radesky, of the University of Michigan Medical School, and Dr Dimitri Christakis, of Seattle Children’s Hospital found, “Electronic toys that make noises or light up are extremely effective at commanding children’s attention by activating their orienting reflex. This primitive reflex compels the mind to focus on novel visual or auditory stimuli.” Toys with noises and flashing lights may be appealing, but they could actually prevent children from engaging in the world around them and from explorations that make their learning more meaningful.

What to do? Play!

GymbaROO completely agrees with the researchers’ suggestions that parents should try to make the most of their time by using traditional toys that encourage language-developmental interactions. By the time babies reach their first birthday, they will have learned all the sounds needed to speak their native language. Play is the way children learn new skills, and language is one of the most important skills that children learn while they play. Play develops as children develop and parents play a very important role in giving their child the words they need. The more traditional toys used and stories read aloud, the more words children will be exposed to. Indeed, play doesn’t even require expensive toys. Even pots and pans, a blanket for ‘peek-a-boo’, and a basin with water or rice are wonderful tools for play and language development. Parents, you are actually the best toys, and children will learn a lot of language, when they share play activities with you. There is much evidence that conversational turns between parent and child during play do more than teaching language. They lay the foundations for literacy skills. Children learn to play with language.  Play helps develop vocabulary, listening skills and helps develop the ability to follow directions. As language becomes more complex, play also develops. For babies, play means activities like; banging objects together, putting objects in their mouth, examining objects. For toddlers; building with blocks, pushing cars, blowing bubbles. For pre-schoolers; pretending to feed a doll, talking on a pretend phone or building a zoo. Play is the lens through which children experience their world and the world of others. For parents, playing with their child provides them with a window into their child’s developmental stage and challenges, while being fully engaged with them. Playing with traditional toys helps to increase attention span, encourages imaginative role-play, exploring options and solving problems. Exploring options is at the heart of lateral thinking. Creative kids feel free to propose alternative solutions and are keener to follow their curiosity. Children learn to take risks and experience the value of making mistakes as part of the play process. Traditional toys provide opportunities for children to express all their wonderful ideas. Toys, like building blocks and puzzles, can help develop spatial intelligence, important for learning maths later on. Playing with traditional toys can teach the social skills of taking turns, and accepting and respecting other’s leads.

Jeffrey Goldstein, PhD, Co-founder of International Toy Research Association claims that the decline of interactive play between parent and child using traditional toys in favour of electronic toys has resulted in an increase of sensory issues and emotional problems in young children. “Children today receive less support for play from their parents than did previous generations in part because of a more hurried lifestyle, changes in family structure and increased attention to academics and enrichment activities.” When children under the age of six spend much time playing with electronic toys, it takes time away from play with toys that are vital for sensorimotor integration, for developing their brain and wellbeing. It is the soothing voice, the soft touch, the loving gaze of a parent during play that will make a significant imprint on a child’s brain and results in the development of positive emotions. Play creates joy, intimacy, self-esteem and openness. Goldstein says that “A child who is not being stimulated by being played with, may fail to link up fully the neural connections and pathways that will be needed for later learning. “

Encouraging conversation – so important to development. Why and how.

Bilingual babies: Your baby’s first year is the most important.